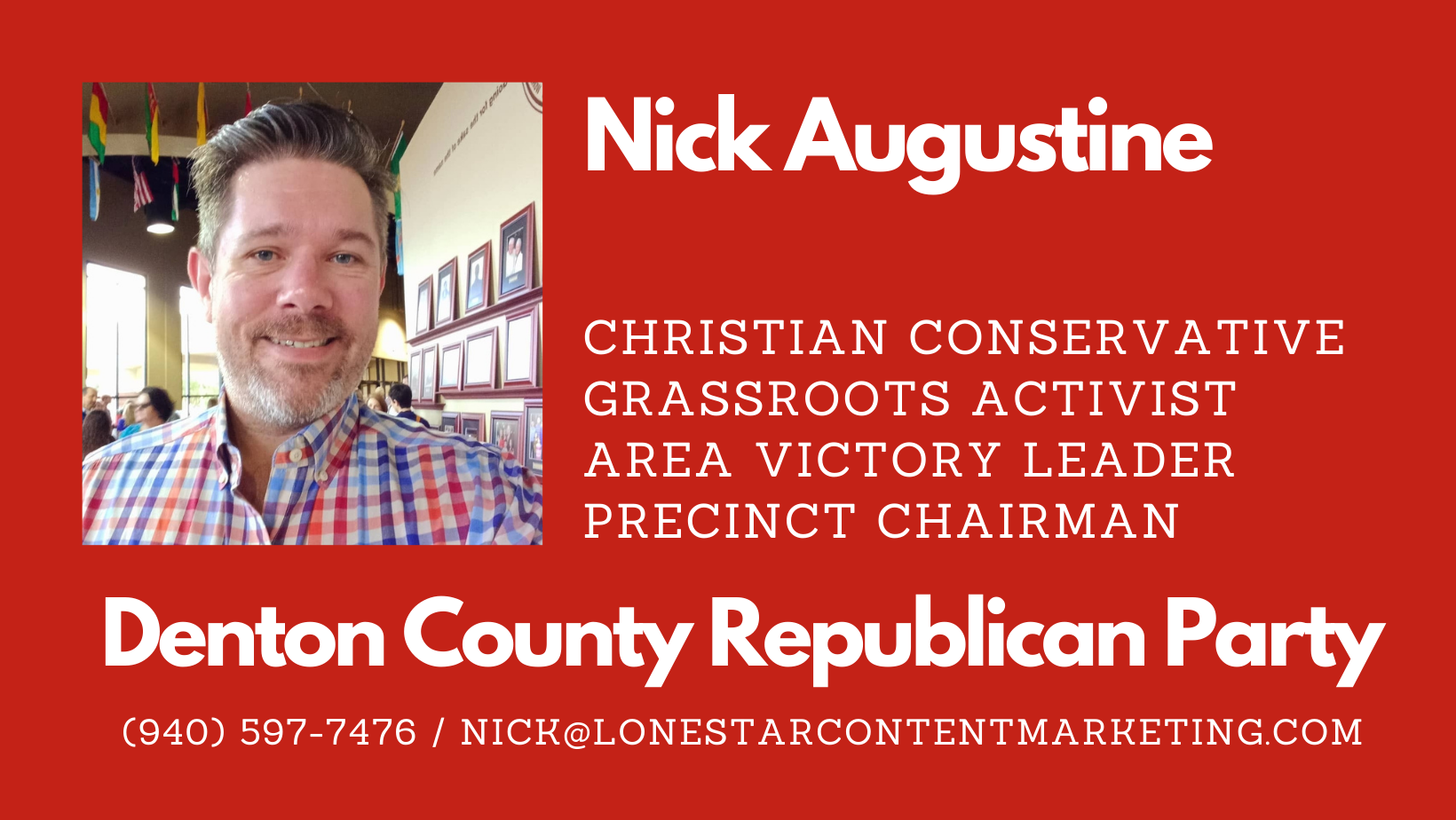 My name is Nick Augustine and I am still figuring myself out. I know one thing, I am a Christian, Conservative, Republican, in my order of principles and values. 2020 was an eye-opening year for so many people and the word “pivot” is everywhere, as many people like me, come to grips with the realities of the political landscape. This year I learned a lot about myself and accepted that just like my father was, and in line with how he raised me, I was an anti-establishment conservative whether I knew it or not. I look back and from the day I declared I refused to practice law because I didn’t want to be caged or limited, to the current day, my tail poofs when anyone tells me what to do. Likely from living a controlled life too long into my young adulthood, I have become fiercely independent in life and defensive of my values and personal ethics.

As a Christian, and watching elected officials react to the “plandemic” as I call it, my eyes have been open, and I have been taking notes with a critical pencil. While some are going to call me this name or that or say I am flipping for some sort of advantage, I simply admit that I pulled my head out of the sand and started looking into issues and actions in a new way, with a focus on Christian principles and values first and foremost. 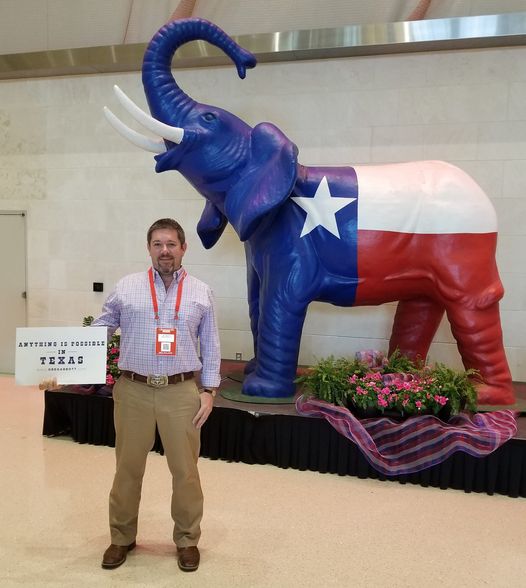 Dad was right and mom was left. I jokingly tell people I thought they were going to burn down the house the night Bill Clinton was elected. I remember my father talking about “Slick Willie” and calling Nancy Pelosi an idiot, yelling at the TV then switching back to CNN to see what the other side was saying. I was a Young Republican in college, and why wouldn’t I have been in the mid-90s with a Red BMW and enough Brooks Brothers blazers and slacks to dress an army of young preppies. I was the president of my Sigma Phi Epsilon pledge class, a judicial vice president in the Inter-Fraternity Council, and was headed for law school. I was a full-blown J Crew cliché like David Spade in the political humor movie of the time, PCU. Despite being raised by anti-establishment parents, I was a product of the established environment around me. I didn’t ask questions, just did what I was told as my parents paid my way so long as I didn’t do anything out of turn.

20 years later I became a Denton County Republican Party Precinct Chairman in 2015. I had no idea there was division in the party, I simply wanted to be more involved in helping Republicans win elections. I was friendly with the people in charge and kept my mouth shut and tried to find my place in the ranks, waiting to earn the respect of others and opportunities to do more and learn. I accepted what I was told and didn’t question much. All of that was about to change. I was about to find my principles and put my Christian foot forward. I heard all the elected leaders talk about Christian values and legislative priorities and started to wonder what happened after people were elected and why were there so many excuses when things were not coming to fruition.

How I Kept My Head in the Sand: Establishment & Grassroots Division 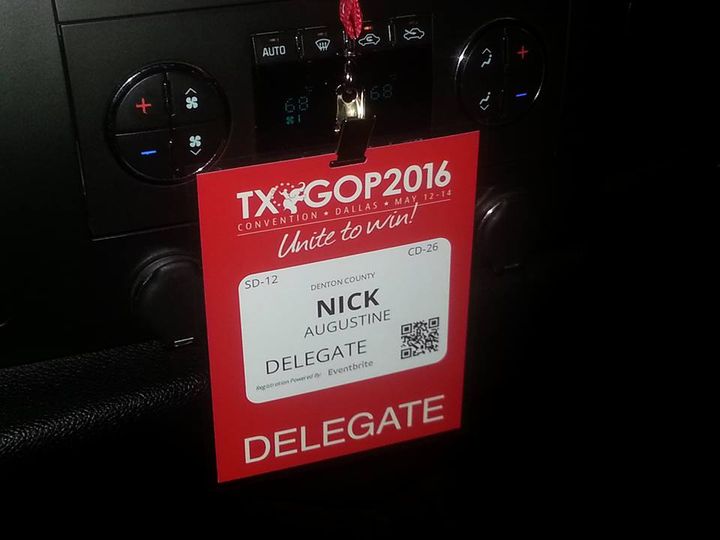 I did not understand the division in the party until there was an SREC race that became heated. I was paid by a campaign to get their information out and got caught up in a long-standing feud among several folks, and had no idea what was coming or how deep passions ran. And when the new party chairman took office, from outside the establishment group as I saw it, I went to meetings, tried to be involved, and get to know the new chair. Boy, the looks I got from some people who acted as I betrayed them, while all I was concerned about was helping get out the vote for Republican candidates.

As the next county chair took office after an interim chair, I was happy to be offered a vice-chair position. I continued to attend events, drive in parades, and support the party. I knew it was important in that position to not get involved in battles of primaries. I still gave little thought to the party division and was a little oblivious about who supported and fought for my priorities as a Christian first. I believed that every Republican was a fighter for my values. And I often told my friends that I was on the same page with local, statewide, and national Conservative groups but I didn’t always like their tactics. I should have paid more attention to what was being said. I was uninformed. It was my fault for not looking deeper and peeling back layers of the big RED onion.

The Save James Case, Yes in Texas, and Why I Support Jeff Younger for HD 63

The day I learned about the Save James case was not long after Jeff Younger made news on the Capitol steps in Austin, raising awareness about his custody case and his son James, being forced into transition to a female. I frequently say this is my “flip the tables over” issue and I called my state representative, mad as a hornet, that this is something that could happen in Texas. I told him the judge and lawyer for the mother needed to be disbarred and the next legislative session must make it a top priority to make sure this cannot happen to innocent children. The other day I saw Jeff Younger at an event and asked him how I could help fight for every child who could be targeted by adults pushing a perverse and twisted agenda.

Jeff will fight for all of us and our children, and grandchildren. While watching the inaction of many other elected representatives, I kept making calls and texts to my legislative priorities friends, asking why the transgender ban kept getting kicked down the road. I asked, “Is it too hot-button for people worried about re-election?” I hoped there were plans in the background to get things done. The more excuses I heard, the more my red alert light started going off in my head. I don’t like being fed bologna. I started saying, “I want representatives to fall on the sword for the really important issues, their re-election be damned.”

Legislative Priorities, and My Concerns About Career Politicians 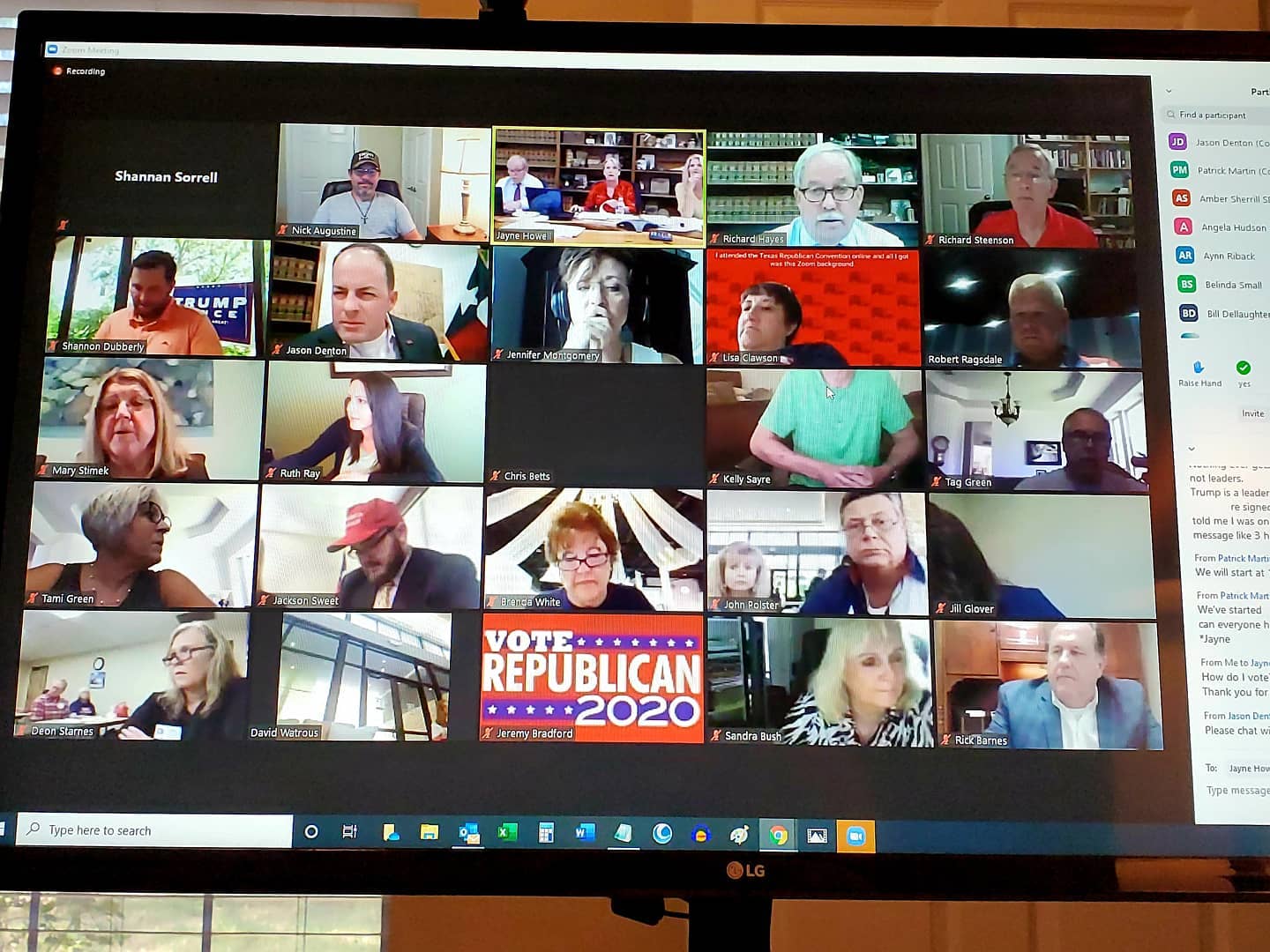 I understand that roads and bridges need to be built. I understand that subdivisions and municipal utility districts need construction. I understand that people are moving to Texas and there is a push to turn Texas blue. As a Christian first and foremost, I believe that anyone who knows the Bible, understands that the train has left the station and we can see the caboose. And at the end of the day, I am more concerned about securing legislative protections for my Christian and Constitutional values and standards, than the business and financial concerns. My priorities today are Faith-first.

Every time I think of being a good Christian first, and putting worldly issues second, I feel good and right in my decision-making. I am not interested in battling among divided people in the party, and I don’t care about keeping score as to which side won which races. Yes, I do work in digital marketing and make money working on campaigns, and I feel good about, working with candidates, I support outside any business relationship.

Career politicians are not necessarily bad as some say, so long as they remain principled and work their tails off to save Texas and the USA from the progressives, liberals, and Democrats. And I will always give the new guy or underdog, an opportunity to show me what he or she can accomplish in the job position they seek. And if I don’t see proof of performance or something else raises an eyebrow, I may make other choices in future races.

The Publications: Oh My Stars, No Wonder Some Are Mad As Wet Hens

I have stumbled into a few grassroots websites, some rather critical publications. Since falling in love with the Onion in college, I have loved political cartoons and satires. Mix in some facts and performance data, and I am hooked! Great memes and fair ribbing aside, it is important to use critical thinking and hold elected officials’ feet to the fire to make sure they are doing everything we would be doing if in their shoes, however hot.

We had a speaker at a recent meeting who talked about how nasty we are to one another in politics and how we call ourselves Christians and act quite contrary. He’s right. I am guilty as charged, as are many reading this article. We can do better. Laugh at the articles but don’t attack others, ask or prompt them to do better. Help them up if they need it. If they won’t respond or don’t perform as expected, mobilize, and support a new calendar. The primary season is not for the weak. Elected officials should be praised for exceeding expectations and criticized for failing to measure up.

Taking A Stand While Keeping Personal Relationships: They Should Be Mutually Exclusive

Like two lawyers, friends since law school, go head-to-head in zealous representation of their clients, while keeping their relationships aside, I hope more people in politics can separate friends and business. Being a grassroots activist and precinct chair, in roles, I am still learning every day, I am here to work and help voters make the best decisions at the polls. Every primary season I try and remind myself and others that we may be split on candidates and issues, but we must coalesce to support Republicans in general elections.

Somehow, I still have a handful of friends from the other party and that is probably because we agree not to talk about the issues that divide us personally and politically. Likewise, I hope we can all be friends with one another in the GOP, in our Conservative groups, and our communities. Being respectful of others in primary candidate preferences is important and we should remember not to go with groupthink, and to support candidates who share our values and priorities.

As we agree on some and disagree on others, we all have one person we can rely on. Go look in the mirror and tell yourself that only you can control how hard you work, and work hard like you are the only one in the army.